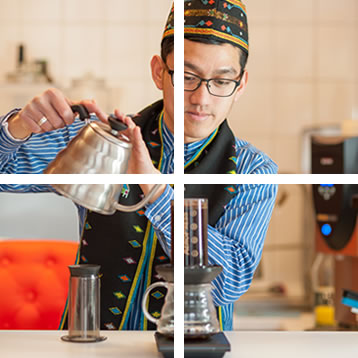 Nicolas went on a 21 days coffee trip in Indonesia, his home country, to find small scale farmers who produce high quality coffee and with whom he could move into direct trading. He visited six islands from the west to the far east of the country: Sumatra, Java, Bali, Flores, Sulawesi and West Papua.

It was an intense trip with a lot of meaningful stories – especially meeting and engaging with a lot of precious people along the way.

Nicolas didn’t collect any information beforehand  (e.g.concerning cooperatives or contact person). Being a believer he just trusted God to lead him where he would find the right people and the right beans.

THIS IS NOT WHAT WE WERE SEARCHING FOR!

In Sumatera, in the Highland of Gayo, he visited the PERMATA GAYO Cooperative. He was warmly welcomed by the staff of the cooperative even though he didn’t give notice beforehand.

The following day Nicolas was accompanied by two staff members to have a look at a certain organic coffee plantation in a nearby district. There in a village he got to know a man who collected Kopi Luwak, the most expensive coffee in the world at that time. This farmer gave detailed information about the nocturnal animal and how he and other collectors processed the beans – to our understanding this was already close to specialty quality.

But sadly those small scale farmer only were processing the Luwak Coffee they collected to have an extra income. The harvest of their own plantations was brought to the washing station, which is owned by the cooperative.

Nicolas was even  offered to beccome a owner of a plantation there. In case he would finance the purchase of the land and also the labourers who would cultivate it and take care of the coffee plants.

When he asked for further details he was promised that he would get them. After he had left Sumatera, he again requested the information but wasn’t given anything.

IT WAS A STRUGGLE EVEN TO MEET A SINGLE FARMER!

In Bali Nicolas was accompanied by a driver who was not a Balinese. Together they tried their best to find small scale farmers in the region of Kintamani. They asked a lot of local citizens, sadly everyone told them to visit the neighbouring region, Tabanan Regency,  since in Kintamani itself you couldn’t find coffee plantations. In Tabanan, Nicolas could only meet the wife of the cooperative called Subak Abian, who didn’t know anything about Specialty Coffee and also didn’t have further informations. She sold a sample but it was just way below Grade 2.

We learned that way that Kintamani is famous for volcanic soil and therefore coffee traders use the name to market coffee grown in other areas of the island.

By doing so they also misuse the term of Specialty Coffee: the true origin needs to be given.


There they also could find a lot of places that sell Kopi Luwak – “thanks” to luwaks kept in cages where the animals are fed with coffee cherries. The beans are picked from the excrements.

What a difference to the farmers  – or better to say collectors – in Aceh Takengon.

Generally on Bali it was a real struggle to get information about small scale farmers due to the power of so-called middle men. A lot of those traders have their hands in it and don’t like others to sniffing around and trying to do direct trading (the story got changed though since the beginning of 2019 – click here to read it).

We really wished to gain a direct relationship with farmers in Toraja. Partly because we had heard about a famous coffee called “Tongkonan Toraja Gunung Sesean”.  Kaffeerösterei Speicherstadt Hamburg was promoting it on their website www.solvino.de – with a price quotation of 199€/kg (roasted beans)!

When Nicolas arrived in this specific Toraja region he very soon found out that this coffee never existed. The farmers and him used the information given on the website to trace it back to its true origin – an isolated coffee plantation run by a japanese company.

Update: Later in June 2018 Nicolas met a representative from Speicherstadt at the TTC Meeting. He approached the guy and asked him about that particular coffee project. The agent just laughed and carelessly said he knew all along that the coffee trader was making up a story. Thanks to those lies – about the coffee being stored in traditionally and specifically made baskets to increase the aroma – his business did very well but not the farmers in Toraja.


Within this region Nicolas got to now some small scale farmers but they had never heard about “Specialty Coffee”. After further inquiry he found out that they only knew the process of “full washed” (or “natural”). The beans were sold to a middle man for a fixed price, defined by the middle men (or coffee traders).

Those farmers also didn’t harvest by picking but only stripping (the fast way). At the end of the story they were going for quantity not quality due to the low price offered by the traders.

They didn’t differentiate between ripe and unripe cherries. Within Indonesia the quality of those beans would not gain more than grade 3 or even 4 – really bad!

So after getting to know RICOLTO, a belgian NGO, Nicolas encouraged the farmers to get in touch with this organisation. Even more so because it had an office not far from that region. Unfortunately up until now (2019) the farmers have not applied for training and teaching in processing quality beans because they also understood that it means more and harder work. Sadly so far only a small number of simple farmers have embraced this opportunity and committed themselves to producing high quality coffee.

IT WAS REALLY PROBLEMATIC THERE!

Here in Papua is was and is an almost impossible undertaking to get into direct contact with small scale farmers as a well known cooperative  with all kinds of international certificates (you name it, they had it) have their hands on them. But Nicolas managed to get a local contact. Not a coffee farmer himself but who had a lot of insight into the political situation and structure within the society and government. He learnt a lot and came to the conclusion that direct trading is an impossible thing to do for us point of time. The farmers he got the chance to visit where drunk in the middle of the day. Nicolas was asked to pay a lot of money just for that visit and was not allowed to ask any questions – all “safety precautions” for in the interest of this one cooperative.

Politically it was a really hot season as a number of guerilla groups made up of West Papuans were and still are fighting for independence from Indonesia. And Wamena is the so-called base of this movement. Nicolas was there for almost a week and it was a tough time with suspicion everywhere. But the coffees from this region were the opposite – like made in heaven. Conditions are just perfect for growing all kinds of varieties!

We are still hoping that on day we will be able to build relationships with small scale farmers from this region – but most certainly not with that specific cooperative!

GOD’S CHOICE FOR US!

Thanks to a certain indonesian coffee trader in Bandung who gave samples of specialty coffees from this region, Nicolas tried to make a really short visit to Flores within the 21 days of his coffee trip. Indonesian coffee lovers knew about the existence of coffee from this specific island but not specialty.

Just around half of the way Nicolas heard a voice from heaven. He was told to stop there, and he had to see to his right. There he saw a small hut. Simple wooden hut. And he sensed that he should go there and knock on the door which he did. A young lady opened the door and called also for her husband who fortunately a small scale farmer. Later Nicolas found out that this hut with its small garden was actually a showcase from the local cooperative called ASNIKOM, where new coffee plants were nurtured there. Also the owner of this garden was the head of the aggricultural departement on that district, who also an active member of ASNIKOM (more stories about this person are coming on Kaffeereise VII).


Nicolas asked the this family whether he was allowed to stay overnight there and it was really an unexpected request since this family never got that kind of visit in their simple hut. Due to the intense builded relationship throughout the day and night that farmer, called Mr. Franz, requested Nicolas to join him to a big meeting on the following day as he was also to come there as a small scale coffee farmer.

So they went to the big meeting in the state hall of goverment as more than 300 farmers are gathering together to celebrate the signing contract beetwen ASNIKOM, Bank of Nusa Tenggara Timur (estate bank) and also INDOKOM (indonesian coffee exporteur from east java) accompanied by VECO (now its called RICOLTO), belgian NGO.

Nicolas was warmly welcomed as VVIP guest as the news came really fast toward the ones who organized that meeting that a special person is coming from Germany and he is seeking for the best specialty coffee from Indonesian, which Nicolas did. Actually he would gladly join to sit with Mr. Franz but he was not allowed to sit among the farmers. He had to sit with the big names.

After that meeting Nicolas spent the whole night with Mr. Lodovikus Vadirman, the founding father of ASNIKOM, and he really got pumped up as he received a lot of really meaningfull values through Mr. Lodovikus who made the statement that the simple farmers from ASNIKOM value themselves as kings and queens, as their processed beans were declared on nationwide specialty coffee competition in 2012 and also 2014 as the best within the country and therefore ASNIKOM:

This was a really mind blowing statements as it was spoken by a simple small scale farmers with such a big heart and a man with a vision. God combined the hearts of Nicolas and Mr. Lodovikus during this very intensive gathering time. They didn’t sleep at all since Nicolas had to leave toward the airport and travel downhill around 4 hours starts in the morning.

There were around 4 other staffs of ASNIKOM who joined this really insipiring exchange of informations as Mr. Lodovikus learnt a lot of situation of coffee consumption in Germany and also Nicolas details about the history of coffee in Flores East Manggarai Region.

The First Gifts For ASNIKOM

Before Nicolas got back to Germany, he still invited Mr. Lodovikus to come to Jakarta to stay for 1 night or more at his mom’s place as Nicolas found out during his short visit in Tangkul, Rende Nao, that ASNIKOM as a cooperative was really in need for notebooks (or laptops) and his mom had some of these laying there at home.

So Mr. Lodovikus really came to receive these as Nicolas’s mom would like to see personaly Mr. Lodovikus after she heard such a delighted story after Nicolas came back at her place. Nicolas spent also a night with Mr. Lodovikus and took him to a location in the southern Jakarta where there was coffee shops opening in a specific start up scenes area.

They tried some of the best coffees offered and were both agreed that these coffees were still far away from Specialty Quality, in which ASNIKOM’s already achieved and therefore Nicolas left Indonesia with such a determination to promote ASNIKOM as a cooperative and its best coffee to bless the small town citizen of Döbeln – and from there the whole Europe and the whole world!

This is when the commitment was made. Throughout the next four years it was tested but so far has been proven strong enough (October 2019).